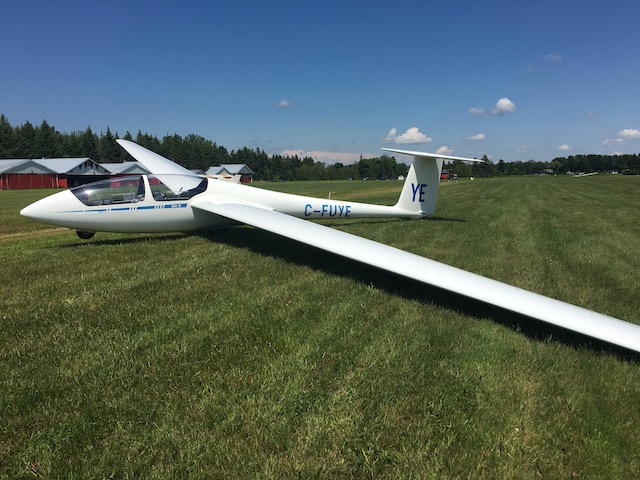 The club's ASK-21 is a mid-wing, glass-reinforced plastic (GRP), club-class, two-seat trainer with a 17-meter wingspan. Many clubs around the world will have at least one of these as a beginner to intermediate trainer, which is also cross-country capable. It has a roomy and comfortable cockpit, great visibility, and handles well in the air and on the ground. 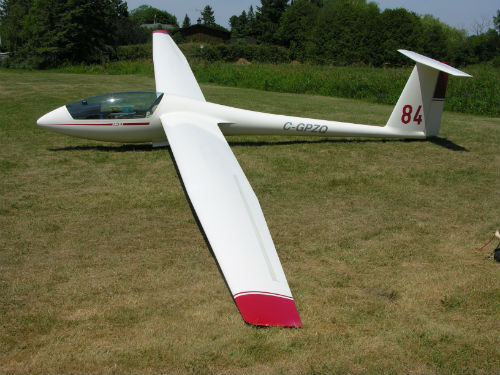 This glider was imported from the United States in April 2012. The LS-4 is a high performance, single-seat glider with a retractable undercarriage. This glider is known for very pleasant flight characteristics and is a capable cross-country performer. It is fitted with an IGC Flight Recorder for badge and record attempts. 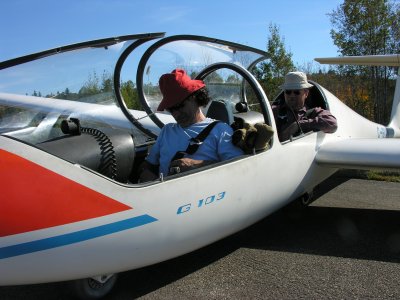 The G103 Twin II (originally designated the G 118) is a high performance two-seater sailplane made by Grob Aircraft. The aircraft is of T-tail configuration, and is fitted with a non retractable undercarriage and upper surface airbrakes. It is a fibreglass aircraft designed for training and high-performance flight.

More information about this aircraft is available on The Sailplane Directory. 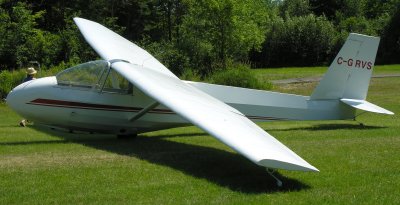 The Schweizer SGS 2-33 is a United States two-seat, high-wing, strut-braced, training glider built by Schweizer Aircraft of Elmira, New York. The aircraft first flew in 1965 and production was started in 1967. Production was completed in 1981.From its introduction until the late 1980s, the 2-33 was the main training glider used in North America.

The 2-33 is the aircraft of choice for the Royal Canadian Air Cadets. It is a very stable aircraft and quickly teaches students the basic flying techniques that all pilots must master.

The SGS 1-34 is of all metal aluminum semi-monocoque construction. All surfaces are aluminum covered, with the exception of the rudder which is covered in aircraft fabric.

The 1-34 is the club's single-seat recreational and cross-country capable aircraft. It is a rugged American design that is light and fairly easy to fly. 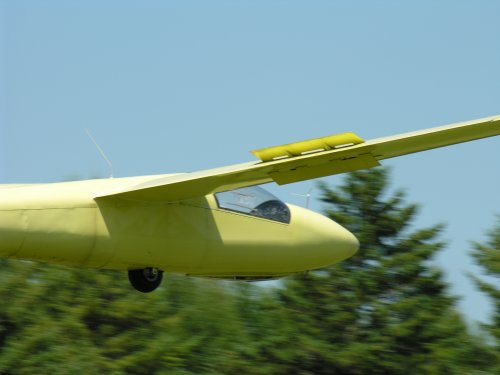 More information about this aircraft is available on The Sailplane Directory. 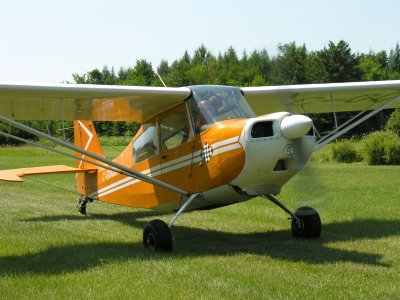 Our 150 horse-power, orange work-horse tug launches all the club aircraft and most of the private gliders from the airfield. Turn-around time is about 12 minutes.

The DG-400 uses the wings and most systems of the DG-202. It has a modified fuselage with a slightly enlarged tailcone and carbon fibre reinforcements to accommodate the engine, which is a relatively large unit with electric starter and electric retraction. This powerful installation, with a user-friendly engine control unit, made the DG-400 easier to operate than other self-launching gliders.

As was typical for the time, the engine, propeller and supporting pylon constitute a single unit that extends into the airflow (in more recent self-launchers the engine usually stays inside the fuselage). The type may be flown either with 15 metre or 17 metre wingtips.

The DG-400 was not aimed at competitions, but rather at leisure flying. Nevertheless, several World Gliding Records have been achieved flying this type. 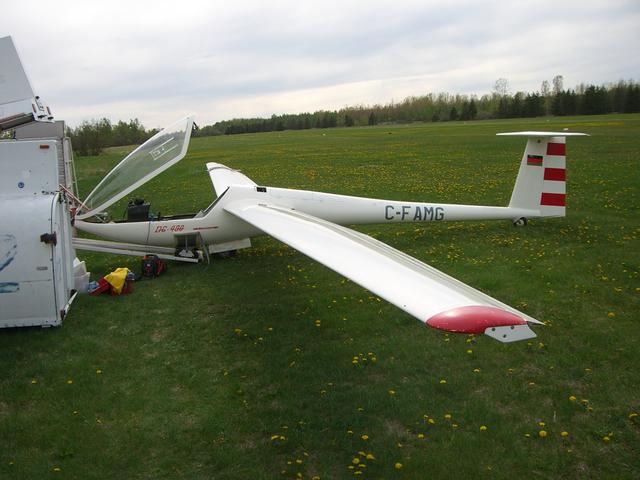 The ASW20 first flew in 1977 and was an instant success, winning numerous world and national championships. Its fuselage is nearly identical to the ASW19's, mated to newly designed wings for the 15 metre Class. Dick Johnson reported that the ASW20 was the first 15 m glider to demonstrate a measured a L/D in excess of 40/1. 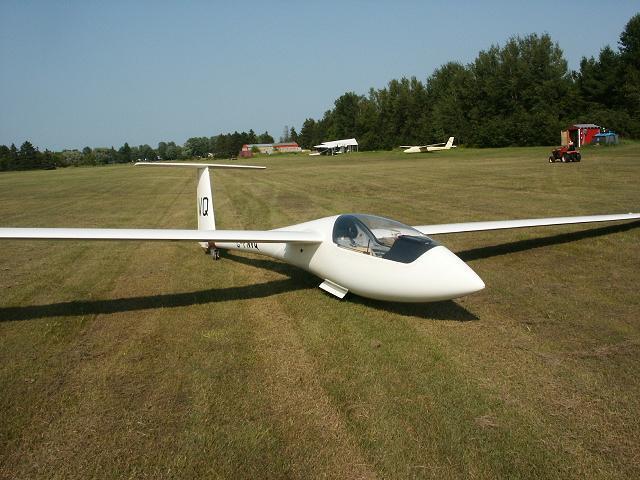 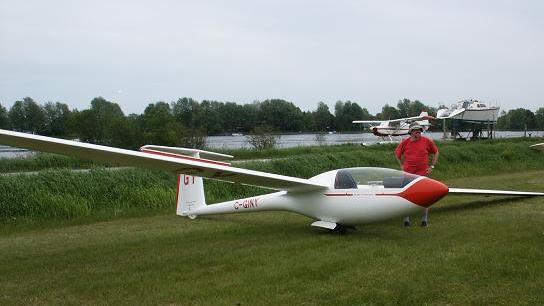 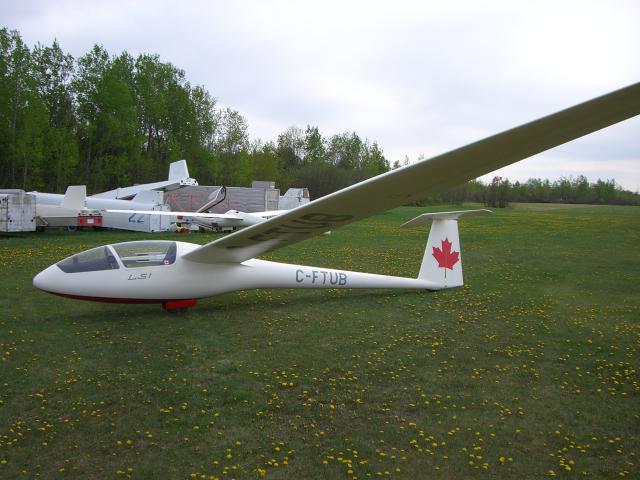 The LS1 made its debut at the 1968 German National Championships, taking first and second place with the designers themselves at the controls. The success of this design increased in the subsequent years until, in 1975, it was the most flown glider in the German Nationals. The LS1 took first place in the 1970 World Championshipsat Marfa, Texas.

This is a first-generation fiberglass glider. If you are helping launch this ship, here are a few helpful points to know.

This glider is equipped with an APRS tracking device. Current location

The prototype made its first flight in October 1967, with a total of 601 being built. The type soon made its mark in contest flying; one flown by Per-Axel Persson of Sweden, winner of the 1948 World Championships, came second in the Standard Class at the 1968 World Championships at Leszno in Poland.

The Libelle and Standard Libelle were very popular and influential designs. Their very light wings and extremely easy rigging set a new benchmark. Their handling is generally easy except that they are quite sensitive to sideslipping and have relatively ineffective air brakes that make short landings tricky for inexperienced pilots. 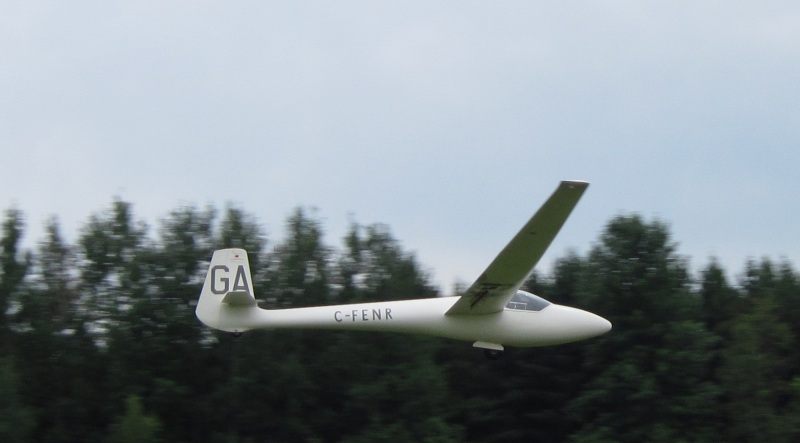 The original design was simplified for homebuilt construction, retaining the wood and fabric wing construction, but the fuselage was changed to a fiberglass structure. The wingspan was shortened to 42.64 ft (13.0 m) to allow the wings to be built in a standard 20 ft (6.1 m) deep garage. Unlike on the original design, roll control was changed to ailerons, with upper surface spoilers paired with lower surface dive brakes for glidepath control. Because the aircraft is tailless the centre of gravity range is very narrow. To simplify weight and balance considerations the monowheel landing gear is located on the desired C of G and the pilot's seat is adjustable fore-and-aft. The pilot simply moves the seat until the aircraft balances on the wheel to ensure that the balance is within the center-of-gravity range. The aircraft manages a 35:1 glide ratio and a minimum sink of 2.26 ft/s (0.69 m/s).

Starting in 1972 the Pioneer II was made available as plans or as a kit. The kit included a pre-made fiberglass fuselage shell. Reported building times range from 600 to 2000 hours. At least one Pioneer II was modified with a 45.93 ft (14.0 m) wingspan.

More information about this aircraft is available on Marske Aircraft.